As many of you know, I have the fabulous pleasure of studying abroad this summer. I have been lucky enough to be spending my summer days in the lovely town of Oxford, England. This includes many cups of tea, yummy pastries and sandwiches and enough cobblestone paths to satisfy me for life. However I was recently given the awesome opportunity to go to Paris with 3 other amazing people I have met on this trip! To 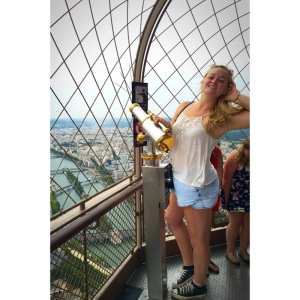 say we had many adventures would be an understatement. It is very refreshing and empowering to travel to a foreign country all on your own and coordinate everything on your own, and navigate a foreign city without knowledge of the language all on your own, or with equally lost and confused peers. Although this post is one of many that I plan to write in regards to my studying abroad, the greatest point that I hope they all bring across is that studying abroad is so much more than studying. Our adventure began when we took a 4 hour bus ride on a Thursday to bring us to the airport, which required 3 bus transfers along the way, and then an hour and half flight to Paris, which had us arrive at 10. Now prior to our departure a wise professor mentioned the threat that comes along with traveling abroad, with a language barrier, and while being female ( a fact that I resent, but that discussion is for another time). The threat of danger is something every girl is very aware whether a their home or abroad, but of course you never think it will happen to you. Being in a group is my first trip when traveling abroad, bot only does it create more room for opportunity, adventure and enjoyment, but also there is safety in numbers. Upon our late arrival to the airport, when there weren’t many people around, 4 American girls attempted to find a taxi to their apartment when we were approached by a man who offered to drive us…now why would that be suspicious?! So we gave the man the address and he told he could take us, however the suspicion began with how aggressively and readily he offered us ride. Next he took us back into the elevator to take us to the parking garage where his cab apparently was, which also raised our suspicion as the queue for the taxis was outside. Needless to say as a group we had our suspicions and made up some panicked reason that we had to call our parents which allowed us to go back upstairs and get in line for a legitimate ride. ( I don’t say this to alarm anyone or suggest that he definitely was trying something suspicious, but rather the importance of trusting your instinct and going with your gut! If something feels wrong don’t feel like you owe someone something because you previously agreed, just go with your gut!) Now back to the fun part! Once we were able to meet up with our apartment owner and were shown around we crashed immediately, after all it was around midnight and a very long day. The following days consisted of early tea as breakfast and seeing the many sights that Paris has to offer, and attempting to be classic Parisians by walking around enjoying fresh pastries and delicious sandwiches. Now I could give you an every moment play by play, but I would rather give you my top moments and perhaps you can find something that you would want to see for yourself one day.

1. Macarons: These are the classic treat that I had always heard of and seen (especially on Gossip Girl) but had never actually tried…and once I did I feel in love.  Making it even better we sat in a park right outside of the Muse D’Orsay (where Van Gogh’s paintings reside) and enjoyed some from Laduree which is the infamous place for macarons in Paris, and the price was worth the taste and experience.

2. Notre Dame: Now I feel very blessed and accomplished to say that France is the 23rd country I have been to in my 20 years on this Earth, and I can honestly say that I have never seen anything quite like Notre Dame (I have even been to the

Vatican). I have never seen anything so magnificent and massive as Notre Dame. En route I felt quite indifferent to the whole situation, sure I was excited but I also assumed it would be quite like any other cathedral that I had seen, however, upon entering it was one of the most magnificent places and atmospheres that I have ever experienced.  I would highly recommend anyone to visit it, religious or not. It is quite breath taking and massive, and its beauty is very overwhelming. 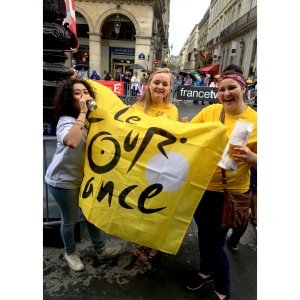 3. Le Tour de France: Although this had no influence on our decisions to travel to Paris for our vacation weekend, it turned out to be an awesome surprise once we had arrived and discovered this massive event. Unfortunately on the day of the event it was pouring rain and freezing! Although we were able to stay and watch the women’s race, after waiting for 4 hours in the rain waiting for the men, we couldn’t make it, as the men were running over an hour late (so technically we would have been there are the right time if the weather had permitted) However the enjoyment came from not only watching the women race (Which is truly amazing, like can I have your legs so fit and fab!) But I was also able to bond and share an amazing experience with new friends, which included a 4 hour long game of iSpy and would you rather? to pass the time. Which brings me to my second piece of travel wisdom, it isn’t always where you are but who you are with. Exploring the world is an experience in of itself, however there is so much more magic when you experience it with others that you truly enjoy the company of!

4. A Lock Bridge Detour: Now as a series of events we realized that because of the Tour de France nearly every convenient

metro was closed (understandably so). This led us to wander around bit before we found an open metro, and as consequence we wandered ourselves over the Lock bridge. This bridge is infamous as the place that many will place a lock on its grated sides, and write a message (usually consisting of initials of loved ones) and throwing the key in the river. However in recent years the bridge has slowly started to sink and as consequence you can’t put locks on it anymore (in retrospect I wish I could have locked one for Murphy, but this idea came too late 😦 ) Either way it was very cool to see this landmark, and one that was decided by people themselves rather than one that was determined by scholars or ‘professionals’, but rather it was an everyday person determination and creativity that has now brought people from all over the world to this bridge of love and a little mystery. Although there where many more legs to our Parisian adventure I will save some of those for later! Have you traveled anywhere interesting recently, or even to Paris?! Let me know what you thought! (:

July is great time for celebration for many reasons, from the great relaxation and adventures that come with summer time to the 4th of July, but perhaps the greatest reason is 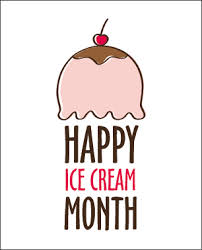 that it is NATIONAL ICE CREAM MONTH. Now my personal opinion is that ice cream should be its own food group. I mean really the possibilities are endless from flavors to the serving options! But sometimes when you are in the midst of a great health kick you have the all time tricky dilemma of ” Do I indulge myself and live on the edge or keep myself from the one thing I am craving?!” Personally making a poor eating choice can off set my good track record because it can lead me into a spiral, especially when it is not planned.

I have discovered the best sweet treat sneak that actually won’t require 14 hours of your time and a million obscure ingredients to make (as I find most healthy cheats require). Banana ice cream! It is

very easy to do and even easier to customize! Simply slice 3 to 4 bananas (more or less depending on how many people you are making ice cream for. You may have to play around with the serving size because this also depends on the size of the bananas) and then place them into a container and freeze them for 3 to 4 hours. Then take them out and place them in a blender with milk (I like to use almond milk). This alone will be tasty! However I like crushing up pieces of dark chocolate and either sprinkling them on top, or using the blender to do so, depending on the abilities of your blender. This is a great fairly healthy alternative next time you’re in a crunch for a sweet treat! Other favorites of mine include sprinkles, raspberries, blueberries, and even some chocolate sauce. There are so many other options! Let me know what favorites you discover! (: 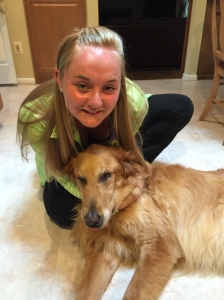 As many of you know Murphy hasn’t been doing well for some time…and  unfortunately we had to let him cross the big rainbow yesterday around noon. Although I couldn’t be there as I am currently studying abroad in England, I have no doubt that he knows I was there in sprit giving him so many hugs and kisses. I know I haven’t been writing in about three weeks, but I hope to share more this week and really get back on track. In light of recent events I hope to write more about this soon, amongst other things.  Losing a pet is a very challenging and different type of grieving and as I am currently experiencing it now, I hope that I can share as much as possible with you all to help not only me, but anyone else who is going through this. Thanks for being y best friend Murf! ❤